Synopsis(from cindachima.com):
When 16-year-old Han Alister and his Clan friend Dancer encounter three underage wizards setting fire to the sacred mountain of Hanalea, he has no idea that this event will precipitate a cascade of disasters that will threaten everything he cares about.
Han takes an amulet from one of the wizards, Micah Bayar, to prevent him from using it against them. Only later does he learn that it has an evil history—it once belonged to the Demon King, the wizard who nearly destroyed the world a millennium ago. And the Bayars will stop at nothing to get it back.
Han’s life is complicated enough. He’s the former streetlord of the Raggers—a street gang in the city of Fellsmarch. His street name, Cuffs, comes from the mysterious silver bracelets he’s worn all his life—cuffs that are impossible to take off.
Now Han’s working odd jobs, helping to support his family, and doing his best to leave his old life behind. Events conspire against him, however. When members of a rival gang start dying, Han naturally gets the blame.
Meanwhile, Princess Raisa ana’Marianna has her own battles to fight. As heir to the Gray Wolf throne of the Fells, she’s just spent three years of relative freedom with her father’s family at Demonai Camp—riding, hunting, and working the famous Clan markets. Now court life in Fellsmarch pinches like a pair of too-small shoes.
Wars are raging to the south, and threaten to spread into the high country. After a long period of quiet, the power of the Wizard Council is once again growing. The people of the Fells are starving and close to rebellion. Now more than ever, there’s a need for a strong queen.
But Raisa’s mother Queen Marianna is weak and distracted by the handsome Gavan Bayar, High Wizard of the Fells. Raisa feels like a cage is closing around her—and an arranged marriage and eroded inheritance is the least of it.
Raisa wants to be more than an ornament in a glittering cage. She aspires to be like Hanalea—the legendary warrior queen who killed the Demon King and saved the world. With the help of her friend, the cadet Amon Byrne, she navigates the treacherous Gray Wolf Court, hoping she can unravel the conspiracy coalescing around her before it’s too late.
My review:
This book was amazing! I loved it. In fact, I enjoyed it so much that I bought it before I returned the copy I was borrowing. While not my favorite(The Way of Kings holds that role) this book has definitely earned its place on my shelf.
The world building in this book is quite well done, creating a world where, just like in reality, history has been broken and scattered. There are regional references(such as calling the northerners savages), and frequent misunderstandings as to perception versus reality. In other words, this world is realistic(other than magic). You see the some of the same flaws in the book's characters as you do in real people and situations.
The characters in this book are great. you have as the two main characters the stubborn princess(Raisa) and the good thief(Han). Their stories remain seperate except for choice encounters. Each is attached to a faction, the two of which oppose each other. Han to the wizards and Raisa to the Clans. The two however have a common enemy, Raisa due to her faction, and Han due to a personal grievance or two. There is far more depth to each, and to discover more you will simply have to read the book.
The plot of this book is filled with excitement. You discover things that the characters took for granted, as they go wrong.  It is truly a wonderful book and I highly suggest it to all fantasy lovers. Enjoy!
My rating:
4 1/2 stars
Profanity: None
Sexuality: Mild
Violence: Moderate
Drugs and alcohol: Mild
Posted by Jeffrey B at 2:56 PM No comments: 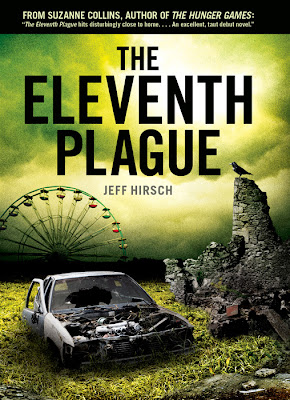 The Eleventh Plague
By Jeff Hirsch
Synopsis(from Barnes & Noble):
In an America devastated by war and plague, the only way to survive is to keep moving.
In the aftermath of a war, America’s landscape has been
ravaged and two thirds of the population left dead from
a vicious strain of influenza. Fifteen-year-old Stephen
Quinn and his family were among the few that survived
and became salvagers, roaming the country in search of
material to trade for food and other items essential for
survival. But when Stephen’s grandfather dies and his
father falls into a coma after an accident, Stephen finds
his way to Settler’s Landing, a community that seems too
good to be true, where there are real houses, barbecues,
a school, and even baseball games. Then Stephen meets
strong, defiant, mischievous Jenny, who refuses to
accept things as they are. And when they play a prank
that goes horribly wrong, chaos erupts, and they find themselves in the midst of a battle that will change Settler’s Landing forever.
My review:
This book failed expectations horribly. I thought that it was going to be a good book but it wasn't. It was rather lousy. I am surprised that this managed to get published as YA. It's middle grade at best, possibly even younger. There was absolutely no depth to this book. The wold was minimalist, the plot did not twist, it was rather predictable, and the only character of any interest was the grandfather, who coincidentally, was dead by the time the book starts.
There was no real good/evil definition either. It seemed Hirsch wanted to make an everyone against the protagonist environment, where the protagonist slowly accumulates friends. Instead he ends up with everyone switching around allegiances, and the reader becoming confused as to why there is no real evil to focus on. The antagonist appears twice in the entire book.
Jeff Hirsch, I'm sorry but your book was not worth reading. Perhaps this book would have been received better had the audience been chosen a little better. I would recommend this to 5-7th graders, but that's about it. If you want a good dystopian, go read Maze Runner, or Divergent.
My rating:
2 stars
Profanity: None
Sexuality: Mild
Violence: Moderate
Drugs and alcohol: Mild
Posted by Jeffrey B at 5:22 PM 1 comment: