Description: Thirteen-year-old Jonah has always known that he was adopted, and he's never thought it was any big deal. Then he and a new friend, Chip, who's also adoped, begin receiving mysterious letters. The first one says, "You are one of the missing." The second one says, "Beware! They're coming back to get you."

Jonah, Chip, and Jonah's sister, Katherine, are plunged into a mystery that involves the FBI, a vast smuggling operation, an airplane that appeared out of nowhere -- and people who seem to appear and disappear at will. The kids discover they are caught in a battle between two opposing forces that want very different things for Jonah and Chip's lives.

Do Jonah and Chip have any choice in the matter? And what should they choose when both alternatives are horrifying?

Review: Man, can Margaret Peterson Haddix write a YA thriller or what? I have no idea where she comes up with these ideas for stories, but they are phenomenal.


Jonah is a great character. He's very much a teenage boy. His parents have worked very hard to make his adoption a normal thing for him. Chip on the other hand has never been told that he's adopted. Frankly, it seems like his parents are pretty disconnected in a lot of aspects of Chip's life.  I was really interested in the two totally different ways these families handled the adoption situation.


The book was incredibly suspenseful. Haddix does a wonderful job of giving just enough information to be clear, but not enough to guess what is going to happen next. This book, like many of her others, is pretty short. I read this book in about two hours.


I wish I could go more into the details of the story, but any further information would really ruin the story. Basically, I loved this book.


Rating:
I gave this book 5 stars.


Profanity: None that I can remember
Drugs and Alcohol: None
Sexuality: None
Violence: Mild. At most, there is a fistfight. 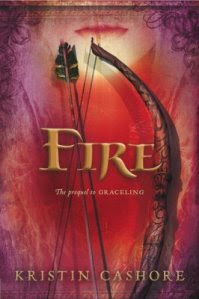 Fire, Graceling's prequel-ish companion book, takes place across the mountains to the east of the seven kingdoms, in a rocky, war-torn land called the Dells.

Beautiful creatures called monsters live in the Dells. Monsters have the shape of normal animals: mountain lions, dragonflies, horses, fish. But the hair or scales or feathers of monsters are gorgeously colored-- fuchsia, turquoise, sparkly bronze, iridescent green-- and their minds have the power to control the minds of humans.

Seventeen-year-old Fire is the last remaining human-shaped monster in the Dells. Gorgeously monstrous in body and mind but with a human appreciation of right and wrong, she is hated and mistrusted by just about everyone, and this book is her story.

Wondering what makes it a companion book/prequel? Fire takes place 30-some years before Graceling and has one cross-over character with Graceling, a small boy with strange two-colored eyes who comes from no-one-knows-where, and who has a peculiar ability that Graceling readers will find familiar and disturbing...

Fire, a human monster mostly distrusted because of her ability to enter the minds of others and influence them, is asked to leave her secluded life in the northern wilderness of Dell and travel to the King's City to help the royal family uncover the plots of power-hungry men who would divide the kingdom with war. Fire must find where the boundaries of her abilities lie and just how far she is willing to go to use them. She must also navigate through the complicated relationships in her life, with her longtime friend and lover, Archer; the young King Nash, often overcome by his emotions and desires; the determined and noble Prince Brigan; and her own father, who was cruel and violent to everyone else but showed his small tendernesses to his monster daughter.

This book was just as good, if not better in some ways, than the first book, Graceling. It is a complex story that highlights a lot of contradictions and difficulties in human relationships. First is Fire's relationship with herself. As an exquisitely beautiful woman, her beauty is more a burden to her than anything else. People are either driven to mindless desire or utter rage by it, and her ability to enter the minds of others through cracks in their emotions only causes more distrust of her. Fire must find where the boundaries lie between good and evil with the use of her abilities and figure out where she stands with her beliefs as she is asked to help a breaking nation. Can some things done in the name of good be bad?

Fire's relationship with her father is also a central part of the story. Cansrel was a vicious monster adviser to the previous king, Nax, who used his mental powers to drive the weak king to lush extravagance and cruelty. It is largely his doing that the kingdom of Dell is in its current state. Fire acts in response to her relationship with her father, not wanting to become him and also wanting to make up for who he was.

I liked that the characters in this book were flawed, complex beings. Fire, and we as readers, love many of the people in this book despite seeing their cracks and weaknesses. Archer is a complicated man, and Cashore did a good job of revealing his layers through out the book. Cansrel, Fire's manipulative father, was a monster in every sense of the word to everyone else, but through Fire we see that he did show her kindness and love as much as he was capable of. Does that negate his evilness? Or just make him more complex and human?

I will admit, though, that at times Fire confused me. She didn't act as I would myself, or as I thought she might. Through the changing and evolving process, Fire reacts to events late in the book in ways that I wouldn't have expected. Sometimes it took awhile before Cashore explained the reasoning for some of these behaviors. It all made sense in the end, but sometimes I had to wait and suspend my understanding until the explanation was revealed.

The story revealed itself at a nice pace for me. A few of my friends mentioned that they thought the beginning was a bit slow, but I really didn't mind it. The characters felt complete and the plot was satisfyingly romantic and intense as Fire got more involved in the war effort. I must also say that one of the pleasant things about this book was that the romance wasn't typical. I am a romantic, I'll admit, and love to get the butterflies in my stomach, but I am so sick of books where 'getting the guy to trust/love/admit he loves you' is the central storyline or purpose of the character. The romance in this book is very sweet and tender and natural, but it doesn't get in the way of the ultimate plot. It doesn't try to take over as the main concern when there are more important things going on. The love that develops between the two characters serves to enhance the plot and weaves nicely into it.

5/5 stars. I'm not obsessed with it, but I'm definitely going to tell all of my friends about it. It's an excellent and exciting read with plenty of romance and adventure. Cashore has done an amazing job and I can't wait to read Bitterblue, which should come out sometime next year.

Violence: plenty of violence and action, but none excessively gory or brutal.

Drugs and Alcohol: None

Sexuality: referred to through out, but never in detail and always respectfully done.

Posted by Unknown at 8:50 PM No comments:

The Maze Runner by James Dashner 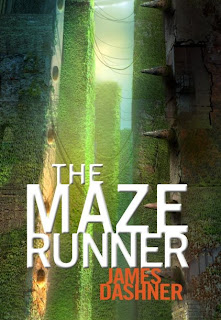 When Thomas wakes up in the lift, the only thing he can remember is his first name. His memory is blank. But he’s not alone. When the lift’s doors open, Thomas finds himself surrounded by kids who welcome him to the Glade—a large, open expanse surrounded by stone walls.

Just like Thomas, the Gladers don’t know why or how they got to the Glade. All they know is that every morning the stone doors to the maze that surrounds them have opened. Every night they’ve closed tight. And every 30 days a new boy has been delivered in the lift.

Thomas was expected. But the next day, a girl is sent up—the first girl to ever arrive in the Glade. And more surprising yet is the message she delivers.

Thomas might be more important than he could ever guess. If only he could unlock the dark secrets buried within his mind.

This book definitely kept me on my toes. Similar to Jason Borne in The Bourne Identity and other amnesia-plagued characters, you find yourself trying so hard to piece together the little information given to you by the author into a back story for the character.

Post-apocalyptic fiction is some of my favorite to read, because I really enjoy the aspect of human survival. Every book has its own flavor of how people survive when situations aren't ideal. What I liked about The Maze Runner was the many different conflicts that contributed to the story. Thomas is conflicted about his past, he wants to know who he is and where he came from. But, once the truth begins to come out, he is rightly conflicted about wanting to know more. Thomas is also conflicted about the information that he gives to the leaders of the group, and the information he's holding in his thoughts. There are of course environmental conflicts as would be expected with a group of boys governing themselves. This is increased with the addition of a girl to the Glade.

I liked the characters in the books. Even though there were quite a few to keep track of, I felt like they were all easily distinguishable from each other. Each contributed to the story in an important way. I especially felt a connection to Thomas' first roommate Chuck. It gives a little bit of a softer edge to the otherwise hardened life at the Glade.

I only had a couple things I didn't like about the book, and they definitely weren't deal breakers. The first was the made up slang. I also didn't like it in Ender's Game.  I felt like it really clogged up the dialogue sometimes, and regular slang words would do.

Also, I felt like not enough was done with the female character in the story. This can be easily remedied in the sequel; however, and I'm sure she'll make a bigger impact.

Overall, I really enjoyed the book. I highly recommend this book for boys, especially ones that don't especially like to read. It's a fast-paced, easy read that will leave you thinking about it for days. I gave it four stars.

Profanity: Mild, and it's not actual swear words used in every-day English, but made up slang

Drugs and Alcohol: None

Sexuality: Mildly hinted at when the girl first arrives

Violence: Mild. People do die in the book, but it's not overly graphic.

Books similar to this one: Ender's Game, Lord of the Flies

In accordance with FTC guidelines please note that I received a review copy from Delacorte Press for Young Readers. I was not compensated for this review.