The Water Wars
ByCameron Stracher
Synopsis(from back of book):
In the not-so-distant future, the most precious commodity on the planet has become water. After Canada dammed most of the rivers flowing into the states, the US collapsed in to separate warring republics hoarding water (Minnesota, Illinowa, among others). The land is plagued by pirates, violent environmentalists, and political thugs, all competing for control of the small water supplies. Sixteen-year-old Vera only knows about pirates and dams from school, but she knows that water is the most precious thing in her life. She is used to only having enough water to live but never enough to quench her thirst. So when she sees a boy poor water onto the ground in the middle of a public street, she is shocked. But he says there is more, lots more, and he knows where it is. Before he can show Vera his secret river, he is kidnapped, and Vera sets out to find him.
My review:
A bit short of a book, it seemed a tad juvenile. This book really isn't as much for the story as it is for the message it contains. Its focus is to convey to us the importance of conserving our resources. Additionally it was a bit short, or it seemed that way at least. There simply was not enough time to bond to most of the characters.
While in the end you grew a small fondness for a few of the characters, most of them were a bit shallow. None had anything truly meaningful to say, and most of it was slightly repetitive. The plot moved slowly at first, but picked up speed about halfway through.
A book that could be picked up in passing, but nothing special. The only object of true depth that it has is the political message the author wants to convey.
My rating:
3 stars
Profanity: mild
Sexuality: mild
Violence: mild
Drugs and alcohol: mild
Posted by Jeffrey B at 9:03 PM 2 comments: 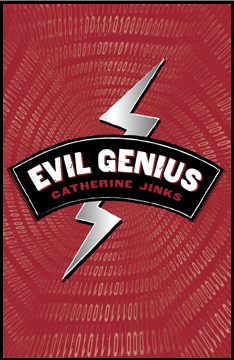 Evil Genius
ByCatherine Jinks
Synopsis(from back of book):
Cadel Piggott has a genius IQ and a fascination with systems of all kinds. At seven, he was illegally hacking into computers. Now he's fourteen and studying for his World Domination degree, taking classes like embezzlement, misinformation, forgery, and infiltration at the institute founded by criminal mastermind Dr. Phineas Darkkon. Although Cadel may be advanced beyond his years, at heart he's a lonely kid. When he falls for the mysterious and brilliant Kay-Lee, he begins to question the moral implications of his studies for the first time. But is it too late to stop Dr. Darkkon from carrying out his evil plot? And is he really who he says he is?
An engrossing thriller with darkness and humor, freaks and geeks, Evil Genius explores the fine line between good and evil in a strange world of manipulations subterfuge and sinister plots that will crack you up as evil never has before.
My review:
A bit crude for my taste, but a good novel. I disliked the foul mouthing, and honestly it was a major distraction to my enjoyment of the novel. Another thing that bothered me was the changing of Cadel Piggot. He starts out as a unscrupulous hacker and becomes more morally correct than everyone but one person in his life. It simply doesn't happen. Aside from the reality separation and language problem it was a decent book. The story line was well thought out, and she wrote well.
I think that her characters could use some work, because as I stated before, they are slightly unrealistic. I enjoyed the fact that the villain could have become Cadel, but instead became the much darker Dr. Darkkon, and his college of cronies. If swearing is an issue for you, I would advise you to steer clear of this book. If not, enjoy!
My rating:
3 1/2 stars(would be higher, but had distracting levels of profanity)
Profanity: Moderate
Sexuality: Mild
Violence: Mild
Drugs and alcohol: Mild
Posted by Jeffrey B at 9:01 AM No comments: 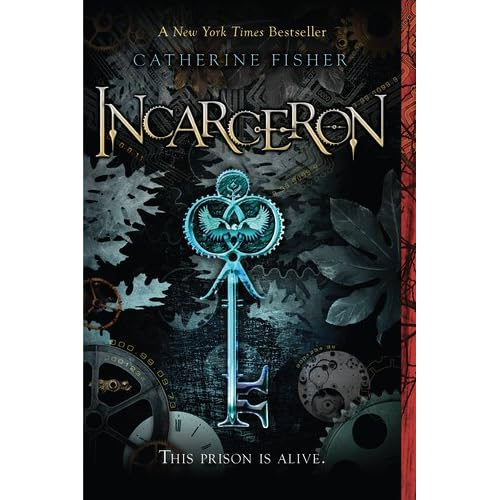 Incarceron
By CatherineFisher
Synopsis(from cover of book):
Incarceron is a prison unlike any other:its inmates live not only in cells, but also in metal forests, dilapidated cities, and unbounded wilderness. The prison has been sealed for centuries, and only one man legend says, has ever escaped.
Finn, a seventeen-year-old prisoner, can't remember his childhood and believes he came from outside Incarceron. He's going to escape, even though most inmates don't even believe that Outside even exists. And then finds a crystal key and through it, a girl named Claudia.
Claudia claims to live Outside-her father is the Warden of Incarceron and she's doomed to an arranged marriage. If she helps Finn escape, she will need his help in return.
But they don't realize there is more to Incarceron then meets the eye. Escape will take their greatest courage, and cost far more than they know.
My review:
An inventive book with a fresh concept, I enjoyed the variety that it offered. I loved the fact that she didn't let anything limit her. She allowed concepts to flow freely, and while her book is not the best I have ever read, it was well worth my time.
This book is a clean, enjoyable book, set far off into the future. So far that they pretend to be in the past, so that they can diminish problems. I enjoyed the characters and the lopsided growth or realization of relationship. Her characters were real they were the kind you believe could exist in life. A rebellious teenager, and one tied to his friends and declared brother.
Creativity is rampant in this novel, combining both future and past to create the opposite of steam-punk. A world full of technology, but those in it have reverted into the past by law. A read that will draw you in, into the very mind of Incarceron.
My rating:
4 stars
Profanity: None
Sexuality: Very mild
Violence: Mild
Drugs and alcohol: None
Posted by Jeffrey B at 8:59 AM No comments:

The Way of Kings

The Way of Kings
By Brandon Sanderson
Synopsis(from back of book):
Roshar is a world of stone and storms. Uncanny tempests of incredible power sweep across the rocky terrain so frequently that they have shaped ecology and civilization alike. Animals hide in shells, trees pull in branches, and grass retracts into the soilless ground. Cities are built only where the topography offers shelter.
It has been centuries since the fall of the ten consecrated orders known as the Knights Radiant, but their Shardblades and Shardplate remain: mystical swords and suits of armor that transform ordinary men into near-invincible warriors. Men trade kingdoms for Shardblades. Wars are fought for them, and won by them.
One such war rages on a ruined landscape called the Shattered Plains. There, Kaladin, who traded his medical apprenticeship for a spear, has been reduced to slavery. In a war that makes no sense, where ten armies fight separately against a single foe, he struggles to save his men and to fathom the leaders who consider them expendable.
Brightlord Dalinar Kholin commands one of those other armies. Like his brother, the late king, he is fascinated by an ancient text called The Way of Kings. Troubled by overpowering visions of ancient times and the Knights Radiant, he has begun to doubt his own sanity.
Across the ocean, an untried young woman named Shallan seeks to train under the eminent scholar and notorious heretic Jasnah Kholin, Dalinar's niece. Though she genuinely loves learning, Shallan's motives are less than pure. As she plans a daring theft, her research for Jasnah hints at secrets of the Knights Radiant and the true cause of the war.
The result of more than ten years of planning, writing, and worldbuilding, The Way of Kings is but the opening movement of the Stormlight Archive, a bold masterpiece in the making.
Speak again the ancient oaths,

Life before death.
Strength before weakness.
Journey before destination.
and return to men the Shards they once bore.
The Knights Radiant must stand again.

My review:
This is my all time favorite book. Its world building is incredible(it should be, he spent ten years on it), the characters are all do realistic, and it is incredible how three stories can run simultaneously and still be spectacular. You grow to love each character, and it is hard to let them go when the book finally ends. I love this book. Robert Jordan(Author of the Wheel of Time series) may have a similar writing style to Brandon Sanderson, but it isn't the same. Brandon Sanderson pulls you in deeply he shows great mastery and his writing is far from repetitive.
In fact, one of the best traits Brandon Sanderson has is his creativity. This book is unlike any other. It has a world far from explored. We learn as the main characters do. Some of what they learn is already known in the world, and some is not, but all is new to the readers. Sanderson masterfully blends together what the characters need to know and what we want to know.
This is an all around fantastic book that I would recommend to nearly any fantasy lover. It has a wonderful plot, incredible characters, and a world you will never want to leave. Enter this detailed world and open The Way of Kings.


My rating:
5 stars
Profanity: Mild
Sexuality: Mild
Violence: Moderate(no gore)
Drugs and alcohol: Mild
Posted by Jeffrey B at 11:40 AM No comments: