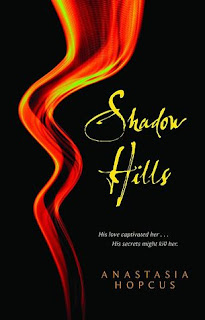 By: Anastasia Hopcus
ARC received from EgmontUSA
Synopsis (From Goodreads):
His love captivated her... his secrets might kill her.

Since her sister’s mysterious death, Persephone “Phe” Archer has been plagued by a series of disturbing dreams. Determined to find out what happened to her sister, Phe enrolls at Devenish Prep in Shadow Hills, Massachusetts—the subject of her sister’s final diary entry.

After stepping on campus, Phe immediately realizes that there’s something different about this place—an unexplained epidemic that decimated the town in the 1700s, an ancient and creepy cemetery, and gorgeous boy Zach—and somehow she’s connected to it all.

But the more questions she asks and the deeper she digs, the more entangled Phe becomes in the haunting past of Shadow Hills. Finding what links her to this town…might cost her her life.
My Review:  When I first read the synopsis of the book, I thought, "Oh great, ANOTHER paranormal romance." Is anyone getting a little burned out by this recent trend? Anyway, I am happy to report that there are no vampires, werewolves, or faeries in this story. Everyone is human.
The setting of this book was really beautifully done. Private school, creepy graveyards and mysterious secrets all made for a very good beginning. Time after time I was so happy to read that Persephone was just so normal. She studies, has friends that are girls, likes to listen to music, and is a generally likable person.  Actually, from what I've read and seen of Anastasia Hopcus, she and Phe are very much alike.  Anastasia, if you're reading this, would you agree?
Speaking of characters I liked, I was really surprised by how much I liked Adrianne, the preppy, spoiled rich girl. I was so impressed that Anastasia Hopcus was able to write a character that is so fundamentally unlikable and really make her likable. Did that make any sense? Adrianne is a character that walks a thin line of being loyal while still looking out for her own interests. Surprisingly complex for such an on-the-surface shallow character.
Unfortunately, I didn't like Zach. He was really one-dimensional and really didn't hold me interest. I think part of the problem was one of the first things he says to Phe is how dangerous he is and she should stay away. Lines like that make my eyes roll into the back of my head. But, as it turns out, he really isn't dangerous at all. He's really quite nice. On the other hand, Trent, his cousin, is a total jerk and every one should stay far away from him.  In fact, a few times as I was reading I thought, "Gee, harassment much?" Phe needed to go to a teacher or counselor and talk about the way Trent was treating her.
The next part of this review is semi-spoilerish.
One other thing that bothered me a little was that the main question of the book wasn't answered.  We never do find out why she is drawn to Shadow Hills and what was behind the mysterious death of her sister. I understand there is going to be a sequel to this book, so it wasn't a huge deal. But, I would have liked to at least see some of the questions answered before starting up a whole round of new ones.
Anastasia Hopcus is a promising debut author. I will definitely pick up the next book in this series.

by Libba Bray
Want to win an ARC of Shadow Hills? Enter at Emily's Reading Room!
Posted by Emily at 2:50 PM